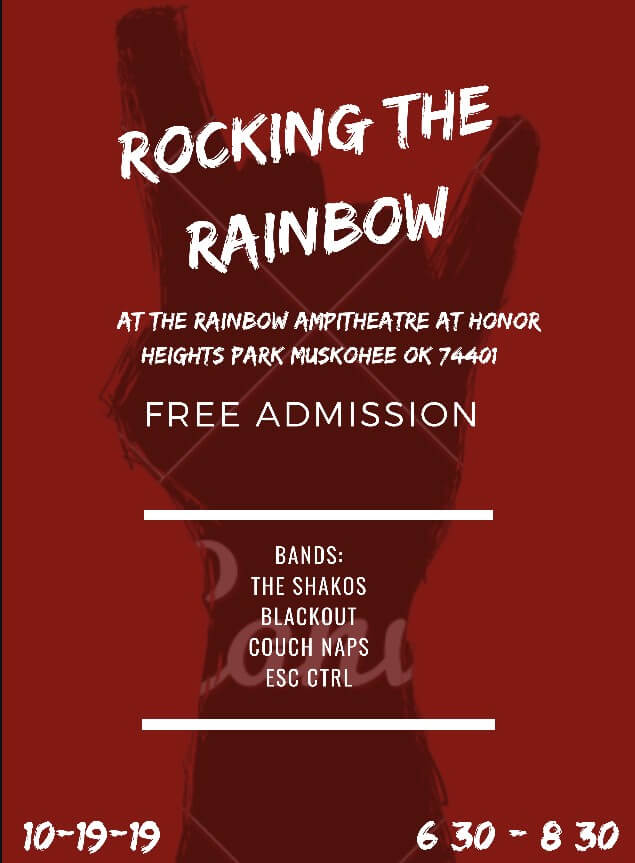 Rocking the rainbow is a concert FREE for everyone and all ages taking place Saturday October 19th at honor heights parks rainbow amphitheater in Muskogee, Oklahoma. We will have food trucks. We will also have 4 bands the bands names are: The Shakos, CouchNaps, Blackout, and Esc Ctrl. I play drums in Blackout and I’m in charge of this event. The event is supposed to last 6:30pm-8:30pm but will probably go on until about 9:00pm. You don’t really see much rock music in the Muskogee area you just really see a lot of country/red dirt. I think this will kind of change things around and get more rock music in the area along with the country and red dirt and that is what we all hope for. This all started about 3 months ago when I was at honor heights park with my dad and we were just walking around. We ended up going to the rainbow and looked into renting it. I said I want to have a concert here because it never really gets used and it’s a perfectly good amphitheater so I got my band together and talked to them about it and then I got The Shakos, CouchNaps, and Esc Ctrl in on it and they were all down and thought it was a pretty good idea. Blackouts guitar player Elye Crockett got in on it and said “let’s call it Rocking The Rainbow and have food trucks there” so we got some food trucks and called it “Rocking The Rainbow” since it’s the rainbow amphitheater. We are hoping to start this show up and make it a yearly thing that we will have once a year with some of Muskogee’s best rock bands.