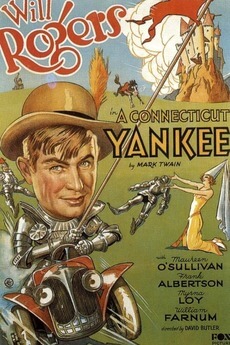 In celebration of the 100th anniversary of Oklahoma’s own Will Rogers’ first movie, we will have an extra special Three Rivers Museum Classic Movie Night at the Roxy Theater on Tuesday, May 8. Guests will be treated to a rare opportunity to watch a Will Rogers’ movie at a historic movie theater when we show Will Rogers’ 1931 comedy classic “ A Connecticut Yankee”. Rogers was once a student at Muskogee’s Harrell Institute in the 1890s and appeared in Muskogee on stage on several occasions during the 1920s.

In addition to the movie showing, we will also have a special appearance by Will Rogers’ interpreter Andy Hogan, memento on dispaly from the Will Rogers Museum in Claremore, and a few other surprises that you will not want to miss.

Thanks to our great Classic Movie Night sponsors, Station One, American Pie, The Rail Taproom, and Club Lunch or Max’s Garage.

Directed by David Butler, the movie was released in 1931 and is a film adaptation of Mark Twain’s 1899 Novel, A Connecticut Yankee in King Arthur’s Court. It was produced by the Fox Film Corporation, a forerunner to 20th Century Fox. Fox had previously produced a 1921 silent movie adaptation of the novel. The movie was the first sound film adaption of Twain’s novel.

The movie represented Will Roger’s 37th film and he would go on to be in 53 Motion Pictures before his tragic airplane crash and death in August of 1935.As in the Wizard of Oz, the actors in the film play more than one role, a character in the real world and one in the dream world. The film stars Will Rogers as Hank Martin, an American accidental time traveler who finds himself in Camelot back in the days of King Arthur . Other actors in the file were William Farnum, a Fox star for many years, Myrna Loy (one of nine movies she was in during 1931) and Brandon Hurst who plays the evil Morgan le Fay and Merlin, who must be overcome by Hank’s modern technical knowledge, while the great Maureen O’Sullivan plays Alisande.