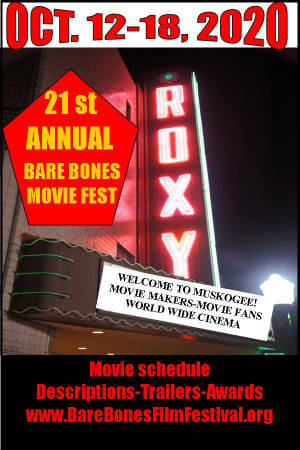 Muskogee’s Historic ROXY Theater has joined with the organizers of the Twenty First Annual BareBones International Independent Film and Music Festival to for the first time, make it a free event for the public. “This something we have wanted to do for a long time” Says ShIronbutterfly Ray the Founder and Executive Director of the film festival, “But it has been difficult to do with all of the expenses it takes to make the festival happen. This year we have had a number of local businesses, Muskogee Tourism, several individual sponsors and the ROXY Theater step up to make this happen and we are extremely excited and grateful.”

BareBones is Oklahoma’s longest running film festivals and one of it’s most prestigious. Attracting film producers from around the world the event has welcomed more film producers and directors to Oklahoma over the past 20 years than all of the film festivals in Oklahoma combined. “So far we have had film makers from more than ninety countries make their way to Muskogee to attend the festival. They love Muskogee and they love showing their movies at the ROXY and in Downtown Muskogee. We love hearing accents and languages from all over the world singing Okie From Muskogee.” says ShIronbutterfly.

The BareBones Film Festival screens one of the state’s largest grouping of feature length movies (movies longer than an hour), though a larger amount are the popular short subject movies, (films that are anywhere from five to thirty minutes) in every genre.

In the last two decades the festival viewing staff and volunteers have reviewed over 25,000 films that were submitted and the festival has screened over 10,000 of those. Movies are submitted in every genre from sci-fi, action, comedies, crime thrillers, horror, westerns and pretty much everything in between. “While a lot of these movies are produced by new and emerging film makers a significant number are from veteran film producers” says ShIron. The festival also has the unique rule of not allowing major movies to compete head to head with smaller ones. No movie that cost more than a million dollars are allowed to compete with smaller budgeted films. Alumni that submit a movie costing more than a million dollars are placed in a one million to five million-dollar category, to compete against one another. “Since most movies are shot on high definition formats and not film, the cost of making a movie has dropped dramatically. This means a movie that may cost as little as $50,000 dollars could have the look and feel of a movie that cost 10 to 20 times as much” says Marshall Thomas Publisher and Editor of BareBones Press. “The major cost of movies are the stars. If your movie doesn’t need a star and a lot of them don’t, then you can make a great movie at less than the price of a used car.”

The event runs from October 12 thru 18 and movies will be shown at various locations throughout Downtown Muskogee that will include Muskogee’s Historic ROXY Theater and the Three Rivers Museum and Heritage Center. All events including the workshops on movie production and marketing as well as screenwriting and movie showings will be free and open to the public. Face coverings will be required for all events. The event schedule can be found on the festival website. www.barebonesfilmfestival.org